The Inspiring Story Behind Caring for Gramma Dove

Families come from all walks of life. Some we are lucky enough to be born into, while others who never had children earn their title out of their love for all children. This is the latter… And how “Caring for Gramma Dove” and “Caring for Pa” evolved.

I met Mildred and John on a cold December day, the first snowfall of winter in New England. I need to be honest here and admit that it was the last place I wanted to be … this was my first assignment as a volunteer for hospice. It was for Mildred’s husband, John. The only information I’d received from hospice was that John was in his final stages after living with terminal cancer for months. There were no children. There were no relatives. It was just the two of them. They were in their 90’s. Now to get back to why I would have preferred being anywhere but there. This particular day would have been my beloved Dad’s birthday. Dad had been gone 4 years and my beautiful Mom just two years, after but it might as well have been yesterday. I asked myself: “Why couldn’t I be pulling into my own Dad and Mom’s home?” I wanted to turn around, go home, and feel sorry for myself … driving through the snow, I pulled into their driveway.

Mildred greeted me at the door. She was gracious, warm and welcoming. She was also quite hunched over from years of debilitating osteoporosis, legally blind, and had two hearing aids, so she spoke rather loudly as she welcomed me in. For some great reason, I didn’t feel as a stranger would meeting someone for the very first time. It was more like I knew this person, as if from a different life. I can’t explain it, but I felt it.

Well, it wasn’t so much that warm and fuzzy feeling when I met John. He was in their living room confined to a wheelchair. He grunted “hello” and asked me what exactly I was there for. He told me he didn’t need me. I looked around the room to search for an answer to his question – because at that moment I really did wonder why I was there.

Watch the Video about “Caring for Gramma Dove”

In one corner was John’s chair, an old recliner that reminded me of the one I grew up watching my Dad sit in. I closed my eyes and was reminded of my Dad. “Interesting,” I thought, “the same green chair.”  When I was little, I used to pretend that chair was akin to a ‘throne’ – every conversation I think I had with my Dad took place with him in that chair. John made me think of Dad. There was also a keyboard in the corner – “shades of good times.” I wondered which one of them played. Mildred asked John if he’d like to sit in his ‘spot’, and I offered to help him out of the wheelchair. He begrudgingly accepted. As Mildred and I lifted him, my heart sank as she struggled to gently place the love of her life into his green recliner. From that place John began to question me. It was mostly small talk. As I answered, Mildred slowly came out of the kitchen with a pot of home brewed tea, a gesture that reminded me of my Mom.  “Perfect,” I thought. “I think I passed John’s test and my reward is a cup of tea.”

I asked about their life and Mildred responded. They were married late in life. They would have loved children, but it was not to be. They were all right with that she said because, “Every child in our neighborhood is our ‘adopted’ child. And every child is our grandchild.” She said they loved being called Gram and Pa. She baked for the children, read with them and played games with them. John told me all the neighborhood kids helped him with his chores. His favorite hobby was tending to his garden. The children loved helping their “Pa” and John welcomed them with open arms. He went on to share how he played hide-and-seek, showed them his magic tricks, (and how he did them!), and taught them how to fish. Together they babysat the neighborhood children and loved them as though they were their own. During good times, the kids had sleepovers at their home. “Oh, the good ole days,” they said. And I felt their sadness.

Their love was palpable. My visit with them that seemed like minutes turned into hours, and as I told them both it was time for me to leave, I asked them if I could return. Although John said he, “really didn’t need a volunteer”, I suggested that perhaps I could be of service to Mildred, take her for groceries, her hair, etc. Mildred loved this idea because, though she was in her 90’s, the one thing she enjoyed was shopping and then coming home and modeling her new outfit for John! He accepted my offer and as I got up to leave I asked if I could give them each a hug. At that moment, I had completely forgotten my reluctance in meeting them. My self pity over the loss of my own Mom and Dad had vanished, as though they’d given me a treasure. It turns out they did.

As I headed for the door, John announced rather loudly, “Essie, wait a minute! You never told me where your parents grew up.” I thought that an odd question but I answered, “Holyoke, Massachusetts.” He looked at me and asked what their names were. I told him “Evie and Stan.” John’s eyes widened and, while fighting off tears, he told me he had known my Mom and Dad! Not only had he gone to school with my parents, he had also performed with them on stage, singing and dancing! I was stunned because I knew my parents had done this, but never in a million years did I expect to hear from John that he not only knew them, but he’d been on stage with them! At that very moment, I felt my Dad and Mom in that room – their presence was tangible. Then, with a grin as wide as the ocean, he got himself out of that chair and into his wheelchair, rolled himself over to the keyboard, and began playing and singing songs that I had grown up listening to my parents sing and dance to in my own living room! As I clapped and sang along, I looked at John and watched his face change. It was no longer the face of a very sick man. He was transported back to another time, a time where his illness played no part. There was more confirmation in that moment that there was indeed a divine presence in that room. It was a gift to us all. They were a gift to me.

As our friendship grew, John softened, and Mildred would happily tell me how grateful she was to have her “Old John back.” He told me to call him Pa. John shared funny stories about his adopted neighborhood grandkids. My visits became 2 to 3 times a week. They told me I was their newly adopted grandchild. They bestowed a great honor to me.

John passed away two months later. I drove Mildred to his service and I’d like to say I felt her pain, but there was no way I could. Though they had no relatives, the line of children, old and young, stretched across the building to say farewell and to celebrate their “Pa.” That night I helped Bea into her home and stayed with her till she fell asleep. As time moved on, my ‘Gramma’ had to leave her beloved home. Together we found an assisted living facility, where her signs of dementia could be best cared for. Now I was the one making us tea. Though I started out as John’s Hospice volunteer, the transference began as I became Mildred’s caretaker. And the pleasure was mine. We continued our excursions until it became too difficult for her to walk. Due to her declining health, our visits were now confined to her cozy little room and our chats became even more meaningful. Mildred filled me in on the book that was her life. How she grew up in Italy and stayed there as a young adult to care for her own ailing parents. How she gave up her hope of ever coming to America, because it was more important to “take care of those you love.” And then with outrageous joy, she would tell me that finally she was able to immigrate to the U.S. alone and, “Though my dream came true, I had no idea that my bigger dream would come true as well …  I met John.”  I began hearing over and over great conversations of such cherished memories, behaving as if it were the first time. Repetition is a beautiful thing.

The last visit I had with my adopted Gram was very different. It was quiet. We spoke in hushed tones. We sat and held hands and watched the flurries coming down. Just as we had done almost one year to the day. It was December.

As I announced it was time for me to leave because of the snow piling up, I told her “I felt guilty leaving her all alone.” Though Mildred was completely hunched over, she somehow managed to stand up perfectly straight and she looked 10 feet tall! She leaned over, pinched my cheeks – hard – and shouted, “Essie, guilt is a wasted emotion!” She told me she, “Wasn’t alone.” I believed her. As I left she said, “Es, I love you.” I responded … “I love you too, Gram.”

The next morning, I received a call from Hospice that Mildred had passed away. Her passing  was peaceful, and I truly believe she designed it that way. This woman and man, who had come into my life as ‘patients’, left an everlasting place in my heart as my friends and my honorary Gram and Pa. They are my good luck charms. They remind us that family can come into our lives quite unexpectedly. Some families, like my own, we are honored to be born into. While others come from places we’d least expect. I was grateful and blessed to have found them in both. It is with profound sincerity that I dedicate “Caring for Gramma Dove” to Mildred and “Caring for Pa” to John … and to my own Mom and Dad who taught me, by example, the importance of being of service to others. I smile with great appreciation and gratitude – and love – as I fondly remember the words they instilled in me: “Es, wherever and whenever you can, be a helper. It will come back to you ten thousand fold.” Ma and Dad, you were right. 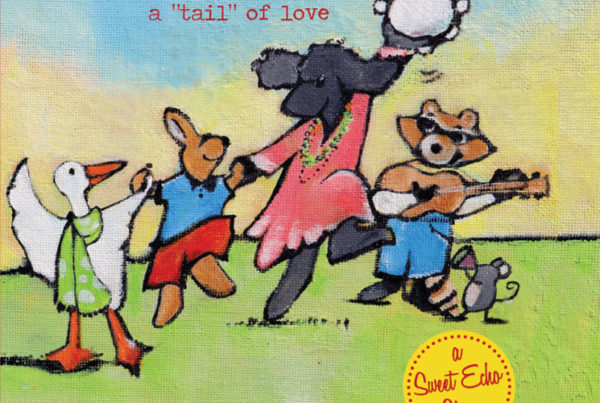 The Story Behind Lola 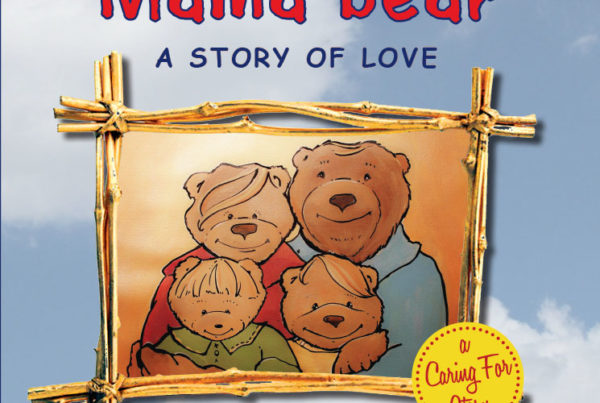 The Inspiring Story behind Caring for Mama Bear 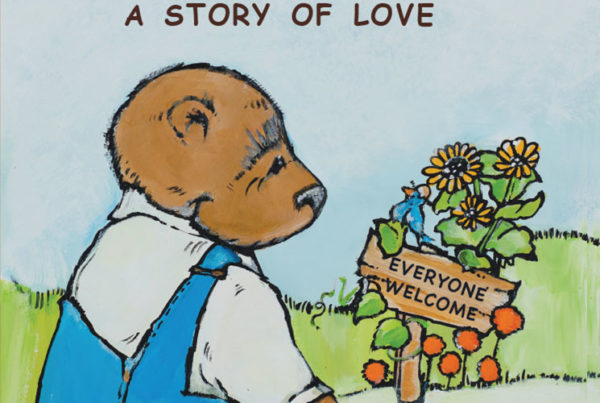 The story behind Caring for Pa